On to the balance of the TCM’s Summer Under the Stars with my suggestions for each “star” being celebrated with a 24 hour salute.

The icon who had a style and voice all his own. From the early 30’s to 1966 when he exited the movies on his own terms, Cary Grant, was one of cinema’s most charismatic actors and his star endures to this day. Why not keep it light and tune in to Mr. Blandings Builds His Dream House with Cary joined by Myrna Loy.

The fiery redhead remains a favorite of mine and that is in large part due to her association with John Wayne and other action movies with tough guy leading men. Not only beautiful, she could hold her own with the boys. If possible check out This Land Is Mine with Maureen… 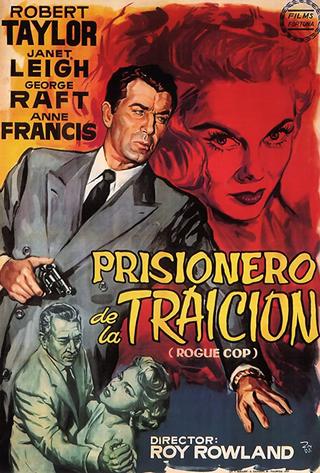 Patterns, connections, trends and interdependence. These are things which draw my attention in general, and in cinema in particular. I’d like to think that visitors to this site have noticed this from time to time, and I’d be even more pleased if I’d managed to pique the interest of some by following up on certain threads that suggest themselves to me. Redemption is the one theme that I guess stands out from the crowd of other ideas, and it’s certainly the driving force behind Rogue Cop (1954), which I want to focus on today. I’d also like to touch on what I feel is a defining feature running thorough 1950s cinema as a whole and maybe then cast an eye over the shape and texture of noir at that time. So yes, it ought to be clear enough that I’m setting myself  a nice uncomplicated and unambitious task with this…

We could use some George Raft dancing and flirting and general awesomeness right now. Enjoy this little music video clip I put together plus dozens more on my Gonetopersia,chas YouTube channel.

Hang in there everybody!

Nice to see one of my Raft YouTube dance clips featured!

Nice little review from Pre-Code.Com! Some fantastic screenshots as well.

This website is a tribute that I dedicate, with great love, to the majestic world of classic movies.

Vivien Leigh - the greatest actress in the world

A fan tribute to the Queen of the Seventh Art

A tribute to a true Hollywood legend

A Celebration of Western Movies... Pardner!

A tribute to the actor John McEnery

Assorted reflections on the indelible Jean Harlow, by Sophia D.

Finding all the things you didnt know you needed

Making sure things are where they really are

Tips, tricks and product reviews for the parakeet parent

some things to wonder about

a fan appreciation of Audie Murphy's life and films

Time Tripping Through the World of Film

Once upon a screen...

...a classic film and TV blog

Appreciation of the actor Dan Duryea

A tribute to the Scottish actor

Two Film Buffs Are Better Than One

Only a Bloody Blog

Tribute to one of my favorite actors and a timeless and elegant man. Fan site online since 1998.

The Mystery of Alan Ladd

Tribute to one of the most popular actors of the 1940's

So few critics, so many poets

"If you think it is so easy to be a critic, so difficult to be a poet or a painter or film experimenter, may I suggest you try both? You may discover why there are so few critics, so many poets." - Pauline Kael

The annex to John Grant's *A Comprehensive Encyclopedia of Film Noir*